The Violator is the demonic form of the Clown and Spawn's intended mentor on Earth and one of the famous Phlebiac Brothers. Spawn and the Violator often clash due to the Clown's persistent taunting of Spawn.

The Violator is in charge of personally mentoring all of the new Hellspawn, and clashes with Medieval Spawn as well. The Violator personally feels that humans are unworthy of the Hellspawn position, and often makes this point clear. He usually sees Spawn more as a rival than a threat as the two have fought on many occasions. He will often motivate Spawn or take advantage of his anger.

There is also a special mini series about Violator.

In 2009, Violator was ranked as IGN's 97th Greatest Comic Book Villain of All Time.

Violator is the oldest and most powerful of five hell-born demons known as the Phlebiac Brothers, and his main purpose is to guide Hellspawns towards fulfilling Satan's desire: to cultivate Evil souls on Earth for Hell's Army. He has been Hell's guide for multiple Hellspawn, his latest charge being the current Spawn, Al Simmons. However, Violator views humanity as weak and so asserts that demons should lead the armies of Hell, not Spawn. Accordingly, much of his terrestrial activities, sanctioned by Hell or not, are aimed at proving his superiority to his master. The Violator's current disguise is that of The Clown, a 5'6" overweight, balding man with menacing face-paint. The Violator is not a demon to be taken lightly: he has shown many times that he is more than a match for a young Hellspawn. His hands are tied by his role, though, as he cannot kill a Spawn without an order from his superiors. His role is not to kill the Hellspawn, but to weaken them and cause them to waste their powers in wreaking havoc. His chief purpose is to groom and prepare the young Hellspawn for their service in Satan's Army. He has been killed multiple times, each time to be returned to Hell and reanimated by his master.

His brothers turn on him at one point, sending him fleeing for his life through a New York city shopping district. He becomes briefly allied with a moral, but naive vigilante.

At one point he is kept prisoner in a scientific facility seeking to weaponize his energies. Violator has to deal with an unexpected trip to Hell, an insanely murderous Angel and the facility's director of security, the stone-bodied Badrock.

Clown has recently reappeared in New York City (how he escaped from Hell is unknown). It is Clown who finds the decapitated body of Spawn in the alleys, and it is he who tries to mask the dead zone created after Spawn's suicide. Clown tries hard to keep the Spawn's death a secret and kills anyone aware of the Spawn's demise. Clown plans to put together his own army to bring down the kingdom of Heaven (against the wishes of the "Elders", supposedly, very powerful rulers of Hell). He travels to Connecticut to enlist the help of a fellow demon who now assumes the life of a human and is married to a human as well. Clown tries to convince the fellow demon (who has not yet been named) to join his own private army, but to no avail. Unfortunately for the nameless demon, Clown is not going to accept no for an answer. Clown gives the man two days to get his affairs in order before departing. The man, still defiant, looks in his cabinet to find the severed heads of his prize winning dogs and a note from the Clown reading, "I'm not Clowning around!"

Clown is absent for a while but then reappears in New York City to find an Angel crucified to a wall (done so by the newly ordained Hell Spawn). He is unaware that there is already a new Hellspawn and asks the Angel who pinned her to the wall, as he beats her with a crowbar. She laughs at his lack of knowledge about "What your side is doing, Mr. Clown," which angers Clown. He gives her a reason to fear him as he contorts his Clown face into that of the Violator. She says she is unafraid, to which he replies, "There are worse things than death, especially for an Angel," he then tears the wings from the helpless Angel's back.

The Clown emerges and claims that he has dispatched the Violator. The Freak curses the Clown, and then retreats in fear. The Clown and Jim are left alone. The Clown explains a little about Jim's newfound power. That his costume is alive and that there are ways of controlling it. He then laments over the Angel's current insanity. He makes Jim believe that someone else had been behind this vile act, and not he. The Clown explains that he is Jim's ally, and that Jim should trust him in order to find the answers he seeks. Before the two can converse any longer, the Clown dashes away. Telling Jim that he has an appointment, and he'll see Jim around.

The Clown is nearly run down by Sam and Twitch's car, after running in front of it. The Clown is then pursued by the two detectives, after he urinates on their car. After being stopped by Twitch, and tackled by Sam, the Clown is taken to the pair's precinct (although this was obviously the Clown's plan). Clown is put into a cell with three other men. Clown sits beside and talks to the one he identifies as Claudio.

He tells Claudio that he wishes to have a conference with Claudio's boss. Claudio becomes defensive and asks why the Clown thinks the boss would want to see him. The Clown explains to Claudio that he is going to make his boss an offer he can't refuse. He proclaims that now that he has found a Spawn, he plans to combine his power, Spawn's power, and Claudio's boss' power in order to make the New Unholy Trinity.

He is shown to be very powerful force and has stated to have superhuman strength equivalent to that of 15 strong men. He can breathe fire, shape shift, possess others, and survive any form of attack with the exception of decapitation from an angel or Hellspawn. 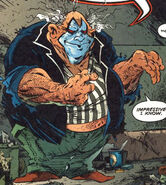 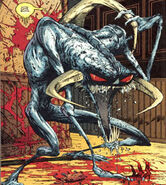