Spawn: The Video Game is a 1995 Super Nintendo game developed by Ukiyotei, based on Todd McFarlane's Spawn.

A renegade crusader named the Mad One has kidnapped thirteen innocent children, including Spawn's stepdaughter Cyan Fitzgerald, and locked their souls in a magical orb called Orb of Purity. The Mad One's long-term goal is to make use of the Orb of Purity to destroy Malebolgia once and for all, and he has already entered the area where Malebolgia resides. Spawn must now stop the Mad One in order to save his stepdaughter, the other children and himself.

Spawn: The Video Game is a tractional side-scrolling beat 'em up with some platforming elements. The player controls the Al Simmons Hellspawn in his K7-Leetha, who can walk, run, duck and jump throughout the seventeen levels of the game. In combat, Simmons can punch and kick in order to attack enemies. In addition to the melee attacks available, the main character has access to an arsenal of special powers that requires the input of a special button combination on the controller. Using a special power will drain his life force meter, and different special powers use different amounts of energy. Several of Simmons' special powers will fire projectiles, but the main character can also teleport as well as use a special power that completely refills his life force meter. Also, the main character's health can be replenished by collecting a special item dropped by one of the "end-of-level bosses" when defeated. The game is over when the life meter is fully depleted, or the in-game timer runs out.

Ukiyotei developed the game on behalf of Sony, who published the game in the United States and Europe. Mike Giam elaborated the story and concept of the game. Together with Kenshi Narushe, the pair designed the core elements of the game. Comic book-style cutscenes were designed by C. Bradford Gorby and displayed between levels in order to move the story forward. The music in the game was composed by Harumi Fujita. 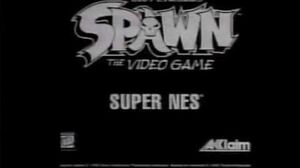 Retrieved from "https://spawn.fandom.com/wiki/Spawn:_The_Video_Game?oldid=6978"
Community content is available under CC-BY-SA unless otherwise noted.